The summit is at an altitude of 420 metres (1,378 ft) above sea level, with a prominence of 314 metres (1,030 ft). The hill´s location on the Bodmin Moor makes it a very striking feature in the expansive landscape. The geography of the surrounding terrain is typical of Bodmin Moor; desolate moorland adorned with tors. Streams and marshes are plentiful surrounding the summit, and the River Fowey rises about one mile north-west of Brown Willy.

Brown Willy is a part of Fernacre, a 1,221-acre private estate, but the public has the right to access the hill and walk on it. (Countryside and Rights of Way Act 2000.) The owner of Fernace holds the grazing rights for the property and shooting rights for deer, snipe and woodcock. 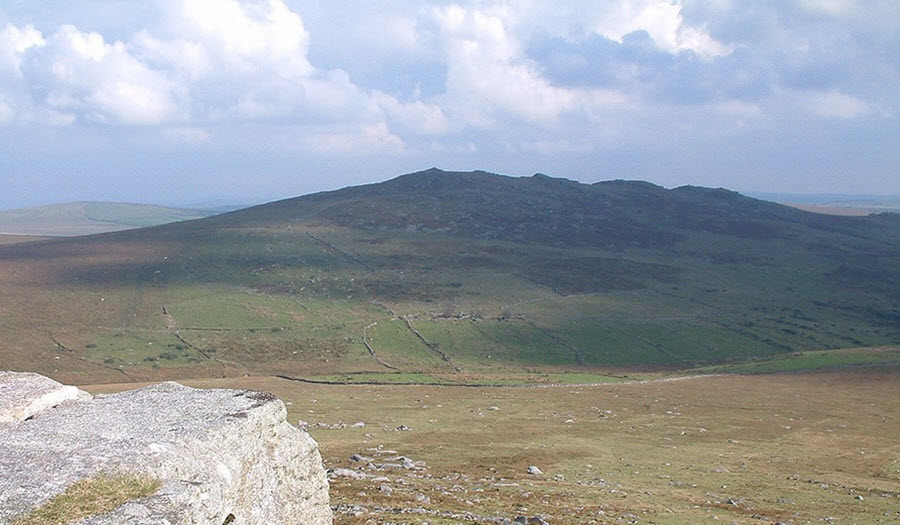 Why is it called Brown Willy?

In Brythonic languages, the word bronn can denote a breast, a slope, a hillside, and other similar things. It is a common occurrence in Welsh placenames.

There are naturally occuring piles of granite boulders around the summit. One of them is called the Cheesewrig for its resemblance to a press-like device used for cheese production.

On the summit itself, you will find two man-made cairns: Brown Willy Summit Cairn and Brown Willy North Cairn. In Cornish, the term for cairn is karn, and it is possible that the name Cornwall is actually derived from that word, because in ancient times, Cornwall was named Kernow.

According to local legend, an ancient Cornish king is buried underneath the Summit Cairn, but if this is true or not remains unknown because the spot has not been excavated.

Unlike other hills on Bodmin Moor, there is little evidence of prehistoric settlements on the upper part of Brown Willy. Researchers have suggested that prehistoric inhabitants of the region may have set that area aside as a communal area and prevented anyone from living there permanently. It could possibly have been a ceremonial procession route, but no archeological evidence for this have been found.

The remains of 17 houses and platforms have been found on the lower part of the eastern slopes, and 23 on the lower part of the western slopes, but zero in the area of the summit. The 40 houses and platforms were all crudely constructed, and were probably only used during part of the year. Almost two-thirds of them were placed in positions where they would have a clear line of sight to both the Brown Willy summit and the neary Rough Tor hill.

rown Willy is considered sacred by adherents of the The Aetherius Society, a religious movement established by George King in the 1950s. On the 23 November, disciples gather to celebrate Charging Day at the hill, with a focus on the sun´s “alignment with positive and negative rocks”.

Each year, a race is held here on New Year´s Day. It starts and finnishes at the old coaching inn Jamaica Inn.

The Brown Willy effect is a meteorological phenomenon named after this hill.

The Brown Willy effect, which is a type of peninsular convergence, produces heavy localized rain when heavy rainfall develops over the high ground of Bodmin Moor and then travels downwind for a long distance. On March 27, 2006, the Brown Willy effect caused the formation of a continous line of showers stretching all the way from Brown Willy to Oxfordshire – a distance of 145 miles (233 km)!

The prevailing wind in Cornwall is a mild, moist westerly or south-westerly one, which blows in from the Atlantic ocean. When it reaches land, it slows down a bit, and winds near the southern coast have a tendency to get diverted to a more northern direction. This creates a convergence zone close to the central/northern spine of the peninsula, where the moisture in the air is lifted up and condensed. The altitude of the Bodmin Moor intensifies the uplift.

In the summer season, the land heats up more than the sea, resulting in daily sea breezes. Convection can develop very quickly over the Bodin Moor due to converging sea breeze fronts from the northern and southern coasts, and this can result in very heavy rainfall – sometimes also with thunder.

Once a rainshower has formed, it can be expected to travel either to the east or to the north-east, as it is moved by the prevailing wind. A thin but very long line of showers will therefore occur along the lenght of the peninsula, all coming from the Bodmin Moor. The downwind high ground of Dartmoor and the Blackdown Hills can further intensify the situation. Rainfall can be extremely heavy along the “thin line” in the lanscape, while nearby locations “outside the line” remains completely dry.

The heavy rainfall brought on by the Brown Willy effect can result in dangerous flash flooding. One 21 st century example is the Boscastle flood of 2004.)