The Eden Project (Cornish: Edenva) is a greenhouse-based visitor attraction developed in what used to be a china clay pit. It full site opened to visitors in March 2001, but the visitor´s centre opened in May 2000.

The Eden Project includes two very large enclosures comprised of adjoining domes. Inside these domes, thousand of plant species grow in a greenhouse environment. Each enclosure emulates a specific biome. The largest enclosure has been created and planted to emulate a rainforest environment and is today the largest indoor rainforest in the world.

Outside the enclosures is a botanical garden home to plants and wildlife native to the United Kingdom. 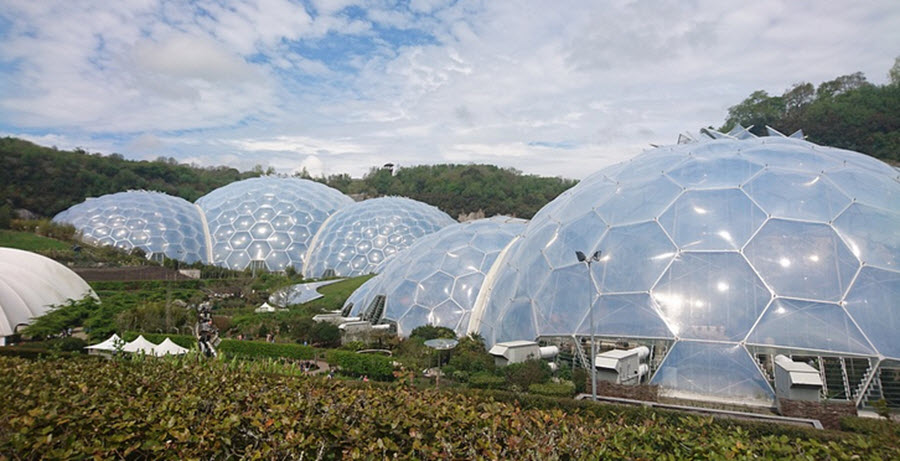 Where is the Eden Project?

The Eden Project is located 2 km (1.2 miles) from the town St. Blazey.

The Tropical Biome is one of two biomes at the bottom of the pit. Here, you will find plants such as bananas, giant bamboo, coffee, and rubber. The environment is warm and moist. The tropical biome is 3.9 acres in size (approximately 100 metres x 200 metres) and 55 m high. 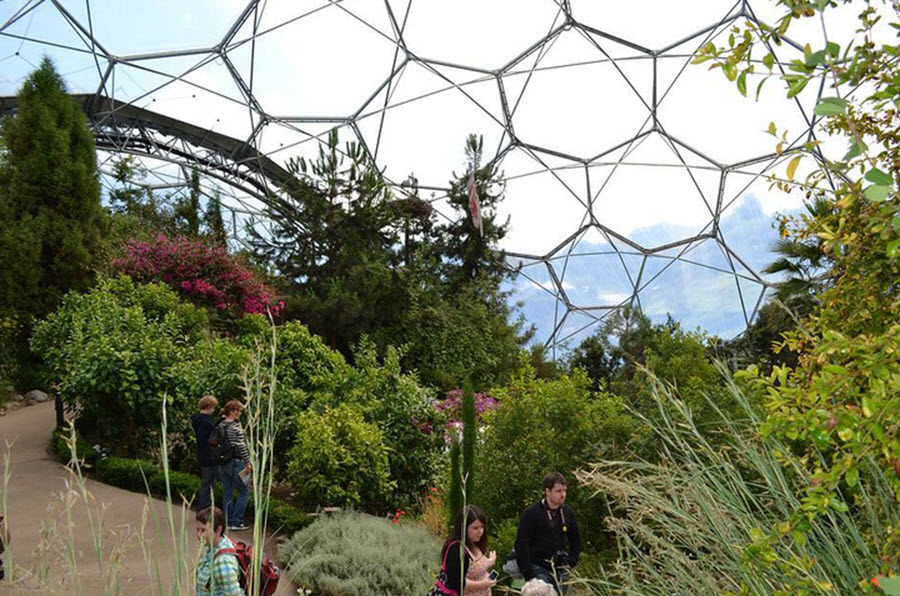 This is the other biome located at the bottom of the pit. It is smaller than the tropical one; 1.6 acres in size and 35 metres tall. It measures roughly 65 m x 135 m. The Mediterranean biome is filled with warm temperate and arid plants, such as grapevines and olive trees.

The outdoor gardens at the Eden Project are home to native plant species and also some plant species from other temperate regions. You can for instance see lavender, sunflowers, hops, and tea plants here.

In 2016, forty sapplings of California redwood (Sequoia sempervirens) was planted at the Eden Project. This is the second-largest redwood plantation in Europe; only the one at Birr Castle, Ireland is more extensive.

The Core is an educational facility added to the Eden Project in 2005, housing both classrooms and exhibition spaces. Throughout the year, art exhibitions are held at The Core. In the anteroom, you´ll find Seed; a 70 tonne egg-shaped piece of art created by Peter Randall-Page.

The water used for the plants and the toilet facilities at the Eden Project is sanitised rain water that would otherwide accumulate at the bottom of the old china clay pit.

Handwashing and cooking is not done with this water.

The electricity used by the Eden Project is Green Tariff Electricity from Cornish wind turbines.

The Eden Project has also received permission to build a geothermal heating and electricity plant, which is projected to power not only the project but also 5,000 Cornish households once it is completed in 2023.

Every year, the World Pasty Championship is held at the Eden Project. This is an international competition tof find the best Cornish pasties and certain other pasty-type savoury dishes.

Since late 2009, much of the Eden Project – including both greenhouses – have been available for navigation on Goole Street View.