The Isles of Scilly (Cornish: Enesek Syllan) forms an archipelago southwest of mainland Cornwall. Five of the islands are inhabited – or six if we count Gugh as its own island and not a part of St Anges.

It´s southerly location and being far out into the Atlantic ocean means that the winters here are unusually mild compared to most of Britain. The climate here is highly influenced by the North Atlantic Current, and frost and snow are very unusual on these islands. Cut flowers – especially daffodils – are grown here to be sent to other parts of the British Isles.

The exposure to the Atlantic also results in the islands experiencing very strong gales now and then, especially during the winter season. On Tresco, which is one of the northern islands, the exposed northern end is characterized by bare sculpted rock and low-growing heather – not much else can survive here due to the strong winds. At the same time, the much more sheltered southern end of the island is home to the lush Tresco Abbey Gardens which are filled with exotic plants from locations such as South America, the Mediterranean, South Africa, and Australasia.

Examples of economic activities that have been important on the Isles of Scilly in the past are fishing, kelp harvesting, shipbuilding, smuggling, maritime pilot services, and flower farming. Today, the tourism sector accounts for circa 85% of the economy and agriculture represents less than 2% of all employment.

Visitors typically stay on the island St Mary, where a majority of the holiday accommodations are found. There is also a time-share resorts on the island Tresco, and the islands Bryher and St Martin´s each have a hotel.

Short facts about the Isles of Scilly

Total number of islands and islets: 145

Most populous town: Hugh Town, with an estimated population of 985 in 2019

The islands Samson and Annet are both home to big colonies of seabirds and seals.

Most tourists arrive during the warm season, but the birdwatching season in October is also important – as well as occasional surprise birdwatching gatherings during other parts of the year.

Because of its location, this archipelago is the first landing in Europe for many migrant birds, and the island St Agnes is actually Britain´s most southerly point. The archipelago is situated so far into the Atlantic that it sometimes receives birds from North America that have been blown off course. Whenever a rarity is spotted, that info tends to spread quickly within the birdwatching community and “twitchers” rush to get to the archipelago to catch a glimpse of the bird.

One of the more notable members of the local birdwatching community is the ornithologist, naturalist and author Will Wagstaff, who has lived here since the early 1980s. He heads guided wildlife walks, belongs to the Isles of Scilly Bird Group, and presents two weekly shows on Radio Scilly: Walk of the Wee and Birdwatching Report. In addition to these books, his writing can be seen in the local magazine Scilly Now & Then. 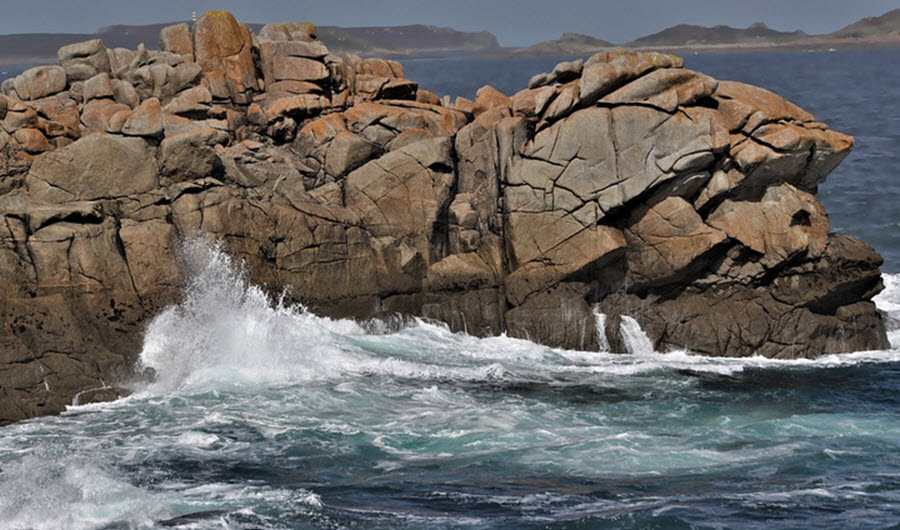 Examples of historic sites on the Isles of Scilly

The Isles of Scilly is the only place in Britain where we find wild the lesser white-toothed shrew (Crocidura suaveolens). Locally, it is called “teak” and “teke”.