Located in South West England, Cornwall is a historic and ceremonial county recognised as one of the Celtic nations and the heartland of the Cornish people. Cornwall jets out into the Atlantic ocean and is only connected with the rest of the English mainland in the east, where it borders the county of Devon. Most of this border is comprised of the River Tamar.

Once upon a time, Cornwall was a Brythonic kingdom, before becoming a royal duchy. In 2014, the Cornish people were granted minority status under the European Framework Convention for the Protection of National Minorities, which recognized them as a distinct ethnic group.

Cornwall´s interesting history, unique culture, and spectacular landscape has made it a popular tourist destination. Even as early as the 1800s, people flocked to the Cornish beaches to enjoy life by the sea. Cornwall has many miles of beaches and cliffs, and beautiful seaside settlements, but is also home to extensive moorlands and grand farming landscapes. In an average year, around five million people visit Cornwall. In the late 1900s, Cornwall became a hub for surfing in England, with Newquay and Porthtowan being the main hotspots.

One popular way of enjoying coastal Cornwall is to walk the whole, or parts, of the South West Coast Path which starts in Minehead in Somerset and runs along the coasts of both Cornwall and Devon before reaching its end in Poole Harbour, Dorset. The total length is 630 miles, making it the longest waymarked footpath in all of England. It can be quite challenging, as it rises and falls at each river’s mouth. Many of the landscapes along the path have special protected status, e.g. as a national park environment or by being a heritage coastal area. The path passes through two UNESCO World Heritage Sites: the Cornwall and West Devon Mining Landscape (added to the list in 2007) and the Dorset and East Devon Coast (on the list since 2001). 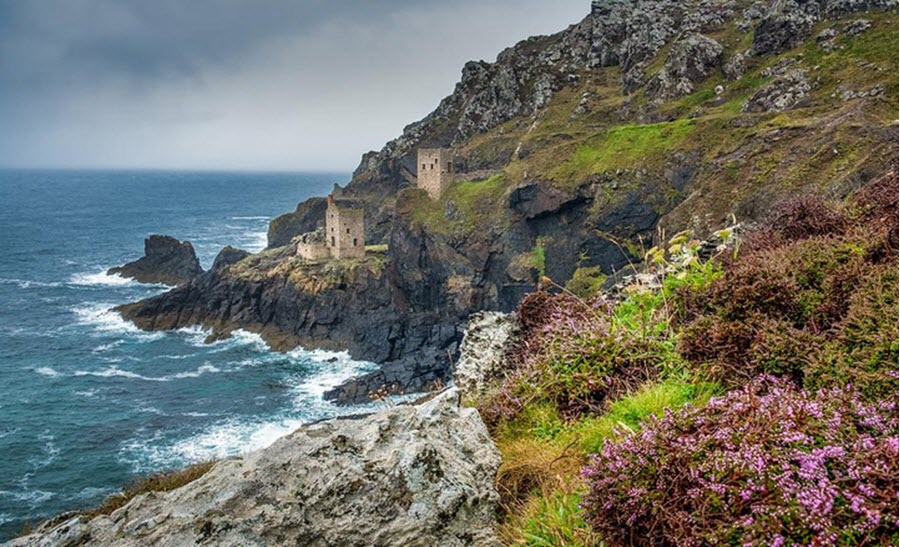 Motto: Onen hag oll (One and all)

Cornwall has an astonishingly long history of mining, and tin mining – and eventually also copper – has been very important for the Cornish economy. The mining industry declined during Roman occupation, but was then revived in the Middle Ages. One of the oldest references to tin mining in Cornwall is found in the Greek explorer Pytheas´ texts, and he lived circa 380 – 310 BCE. During the Middle Ages, tin from Cornwall was imported for the Kings of England and the tinners were therefore given certain privileges. The tin production continued into the modern era and did not decline until the mid-1800s.

The tourist industry has been important for Cornwall since the 1800s, and it today constitutes approximately a quarter of the economy. Fishing and farming are also notable parts of the economy, but both have declined in the 21st century. The most well-known part of the Cornish farming sector is the dairy industry, with regional products such as Cornish clotted cream being recognized far and wide for their distinct taste and high quality.

CFD trading is popular in the UK. Most CFD traders live in London but there are plenty of CFD traders spread all across the country and  Cornwall is no exception.  In fact, the large number of high net worth residents makes allows for a higher density of CFD traders than almost any other part of the UK outside of London.

CFD trading is a type of trading that allows you to make leveraged trades on the market.  This allows CFD traders to make relatively large profits from small market movements.  I recommend that you read this guide if you want to know more about how CFD trading works and where to find a CFD broker.

CFD trading is high-risk and a large percentage of all traders lose money while trading.  You can increase your chances of success by making sure that you take your time to learn how to trade CFDs before you start trading using real money.  You can use a demo account to trade while you are learning.  You should also make sure that you have a fast internet connection with low ping (below 20ms) when trading.

Truro is Cornwall’s main administrative centre and its only city.

Cornwall is well-connected by railway from London, the Midlands, the North and Scotland.

Going by train from London Paddington to Penzance in the far-south west (via Reading, Exeter and Plymouth) takes around 5 hours and 30 minutes.

Cornwall can be accessed by the A30 (starts at the end of M5 in Exeter) and the A38.

The main airport serving Cornwall is Cornwall Airport Newquay (NQY). It is connected to several cities within the United Kingdom, and also to Dublin. Connections to certain foreign European cities exist during high-season, when planes arrive from locations such as Cork, Dusseldorf, Stuttgart, Alicante, and Faro.

Examples of airports fairly close to Cornwall are Exeter Aiport (EXT) and Bristol Airport (BRS), which both have a larger selection of flights than NQY.