The cathedral city of Truro is the administrative centre of Cornwall and an important hub for the county. Unlike many other settlements in Cornwall, it is not located on the coast – it is instead situated roughly 9 miles (14 km) inland, at the confluence of the rivers Kenwyn and Allen, which at this point form the River Truro. Thanks to the river, the city of Truro is connected to the sea at the southern coast of Cornwall. Truro went through a period of great prosperity during the Georgian and Victorian eras, and a lot of beautiful 19th-century architecture still exists here, especially along Lemon Street and Walsingham Place. 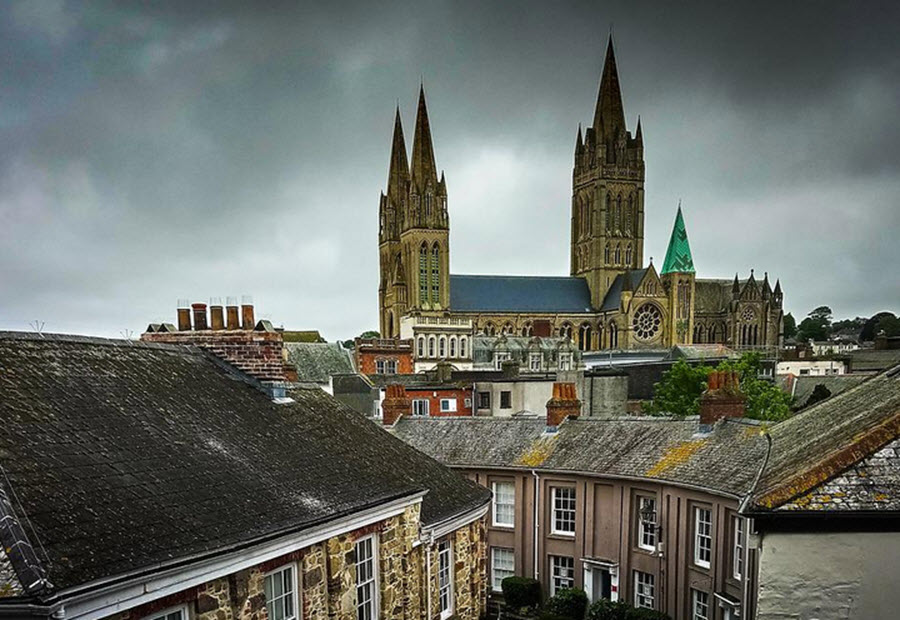 The Truro Cathedral was built in 1880-1910 on the site of St Mary´s Church. Designed by John Loughborough Pearson, it is a Gothic-revival building and its highest spire rises 76 m (249 ft) above the city.

Truro has a long history of being a market town, and the indoor pannier market is still active here and open year round.

Examples of beautiful destinations in the Truro area:

The town Truro developed around a castle built here in the 12th century by Richard de Luci, Chief Justice of England. For his court services, he had been granted land in Cornwall, including this area where two rivers met. The castle disappeared a long time ago, but the town remained and the spot where the castle used to be is today occupied by the Truro Crown Court.

By the early 14th century, Truro had developed into a major port as it had access to the sea through the river but was better protected from attacks than the Cornish ports on the coast. Truro thrived as a centre for fishing and was also a stannary town where tin and copper from Cornish mines were assayed and stamped.

The Black Death did not only harm Truro´s inhabitants directly; it also resulted in diminished trading and this had a negative impact on the port for the surviving residents. As trading gradually recuperated during the Tudor era, so did Truro. In 1589, Elizabeth I gave Truro an elected mayor and control over the port of Falmouth.

In the 1600s, a royalist mint was established in Truro to support the royalist side during the English Civil War. Soon after the Battle of Naseby in 1646, royalist forces surrendered at Truro and leading royalist commanders – such as Lord Hopton, Lord Capell, Sir Edward Hyde and the Prince of Wales himself – used the port of Falmouth to escape to Jersey.

Before the 17th century was over, Falmouth had gained its own charter and was no longer under Truro control – which in turn led to noticeable rivalry. In 1709, control of the river was formally divided between the two parties.

Improved mining operations in Cornwall in conjunction with higher prices for tin caused a boost for the Truro economy in the 1700s and 1800s. During the era, fashionable Georgian and Victorian townhouses sprung up along Lemon Street, and Truro earned the nickname “London of Cornwall”. During the later part of the 1800s, iron-smelting works, tanneries and potteries in and near Truro furthered helped the economy along, and Truro also benefited from the expansion of the Great Western Railway. Truro got a bishop through the Bishopric of Truro Act of 1876, and the cathedral was built in 1880-1910.