Kynance Cove (Cornish: Porth Keynans) is a cove on the Lizard peninsula, roughly 2 miles (3 km) north of Lizard Point, on the eastern side of Mount´s Bay. It is within the Cornwall Area of Outstanding Natural Beauty.

During the early Victorian era, the cove experienced a surge in visitors – a part of a wider trend that involved visiting the Cornish coast from other parts of England. Among others, both Queen Victoria and Prince Albert visited the cove.

Today, Kynance Cove remains a popular destination for holidaymakers and is widely regarded as a very pretty stretch of coastline. The cove and its surrounding coast is owned and cared for by the National Trust, and is included in the West Lizard Site of Special Scientific Interest. 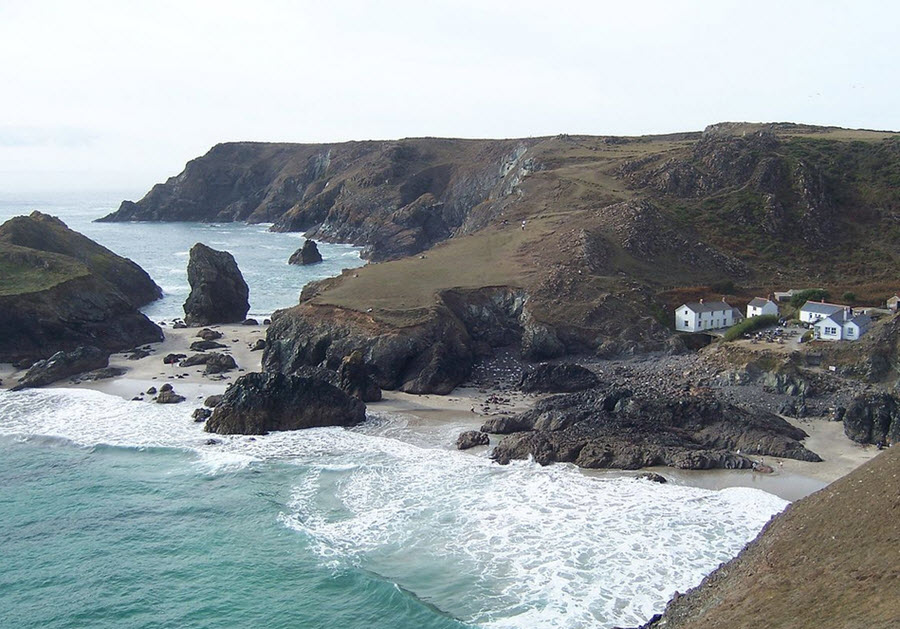 There are two types of ophiolitic serpentine at Kynance: bastite and tremolite. Bastite is the dominating serpentine of the Lizard peninsula, while tremolite is more rare.

The cliffs to the south and the path to the cove are two examples of places where you can observe bastite serpentine. It is coarse-grained, and looks flecked due to the presence of large shiny crystals of bastite.

A long time ago, the tremolite serpentine was broken into blocks and invaded by other types of rock, including granite and basalt. Over time, the softer rocks were eroded away by the sea while the more resilient parts remained, which is how the stacks and tidal islands in the cove were formed.

The four largest stacks in the cove have names: The Bishop, Gull Rock (which is extra jagged), Asparagus Island ( Enys Merlosowen), and Steeple Rock. Steeple Rock towers above the beach in a dramatic fashion.

Asparagus Island – or Enys Merlosowen as it is named in Cornish – is cut off from the mainland almost every high tide. Around half-tide, a snorting can be heard from a blowhole on the island.

There are some caves around the beach which can be interesting to explore, but it is important to follow the recommendations and time it with the tide. If you don´t abide, you risk getting cut off by the rising tide and this can turn into a very dangerous situation.

From Kynance Cove, it takes around 45 minutes to walk to Lizard Point. The path is rugged but doesn´t require any exceptional fitness level. Follow the path in a southerly direction from Kynance Cove; it is marked by acorn signs.

The walking from Kynance Cove to Mullion Cove is approximately 7 kilometres (4.4 miles). It is a beautiful walk along a section of the Lizard coastline and around Predannack Head.

If you want to continue, you can proceed from Mullion Cove to Poldhu Cove.