Nowadays, Tintagel Castle is a ruin, but it was once a functional medieval castle located on the peninsula of Tintagel Island in northern Cornwall.

Tintagel Castle was built in the 13th century but fell into ruins fairly soon thereafter. In the mid-19th century, it became a popular tourist destination, prompted by two wider trends in English society at the time; visiting coastal Cornwall and visiting castle ruins. At Tintagel, one could get both.

Many of the legends about King Arthur connects him with a castle on this peninsula. One example is “Historia Regum Britannia”, written by the Welshman Geoffrey of Monmouth around 1135-38 (long before the current castle was built). According to Geoffrey, Arthur was conceived in a castle on the peninsula. As stories about King Arthur became immensely popular in Britain during the Late Medieval period, many of the newer texts claimed that Arthur was also born at Tintagel, and spent a lot of time there during his life.

Where is Tintagel Castle?

The castle is owned by Charles, Prince of Wales, as part of the landholdings of the Duchy of Cornwall.

The site is managed by English Heritage.

When was Tintagel Castle built?

Tintagel Castle was built in the 1200s by Richard, 1st Earl of Cornwall. This was during the High Middle Ages.

Born in 1209, Richard was the second son of John, King of England, and his wife Isabella of Angoulême. At the age of 16, Richard received Cornwall as a birthday present from his brother King Henry III, making him High Sheriff of Cornwall.

In 1225, Richard acquired the peninsula from Gervase de Tintagel in exchange for the land of Merthen in western Cornwall. Richard had a castle built on the peninsula in 1233 to solidify his power and

establish a connection with the Arthurian legends written down by Geoffrey of Monmouth in the 1130s. At that point, the peninsula was strongly regarded as a traditional headquarter for Cornish kings. Since Richard wanted to establish a link to the past, the castle was built in a style that was considered old-fashioned – the idea was to make it feel as if it has been there a long time already.

The castle falls into ruins

After Richard, the following Earls of Cornwall had minimal interest in using or maintaining the castle, and it was left to the High Sheriff of Cornwall. Parts of it was used as a prison, and later the land was let as pasture. The roof of the Great Hall was removed in the 1330s.

Over the centuries, erosion damaged the isthmus that joined the castle to the mainland, and when John Leland visited in the 1540s, a makeshift bridge of tree trunks was used to access the castle. The defences at the Iron Gate got some reinforcements in the 1580s, as England feared a Spanish invasion.

The letting of the land for pasture continued until the 19th century, when the castle ruins became a popular tourist destination.

What was here before the castle?

The modern day village called Tintagel was called Trevena until the 1850s, when the Post Office decided to use the name of the parish Tintagel instead of the village name. 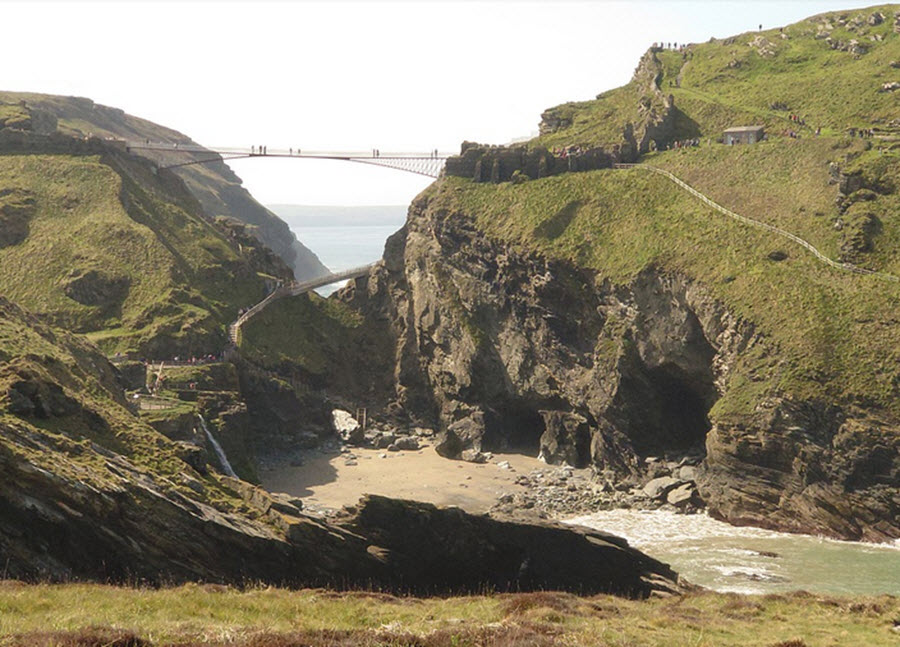 The archaeologist Ralegh Radford directed an excavation of the site in 1933-1939. In 1935, he wrote an interim report and guidebook titled Tintagel Castle. Excavations stopped as WWII broke out in 1939, and Radford was sent abroad for the war effort. Many of his original site reports were destroyed when his house in Devon was bombed by the Luftwaffe.

In addition to the castle, these excavations unveiled significant traces of a high-status settlement being present on the site long before Richard´s castle was built.

In the mid-1980s, fire on Tintagel Island led to significant erosion of the topsoil. As a result, much more of the castle ruins became visible.

The so-called Artognou stone was found here in 1998. It is a stone bearing an incised inscription in Latin. It indicates that Latin literacy existed here even after the end of the Roman occupation.

Excavations during the summers of 2016 ans 2017 uncovered the remains of various structures built during the Mediaeval era. This included fairly large buildings dated to the 5th or early 6th century AD, and accompanying potter and glass artefacts. Remains were found of imported wine containers from the Mediterranean and food vessels from North Africa and Gaul.

During the excavations in 2017, a 7th century slate window ledge was unearthed, inscribed with Latin, Greek, and Celtic word, names and symbols.