Bude (Cornish: Porthbud) is a seaside town in the north-eastern Cornwall, located where the River Neet reaches the Celtic Sea. Locally, this river is also known as River Strat.

Bude developed around its harbour and was also a source of unusually mineral-rich sand used to improve the soil on Cornish farms. During the Victorian era, Bude became a popular destination for holidaymakers, and tourism began to have an impact on the local economy. Bradshaw´s Guide of 1866 describes Bude as a picturesque village with excellent facilities for bathers.

Bude has an excellent sandy beach and also great surfing opportunities. Accommodation is available for a range of budgets, and the vibe tends to be more mellow than in the more “prestigious” seaside towns of Cornwall.

During the summer of 2013, the Met Office recorded Bude as the sunniest place in the United Kingdom, with 783 hours of sun.

The Cornish coast is typically devoid of sandstone cliffs, but that is not true for Bude and its surrounding area, where sandstone cliffs are found from Hartland point (in Devon) to the north of Boscastle. You´ll find the highest cliff in all of Cornwall just south of Bude; the aptly named 735 ft (circa 224 m) High Cliff. 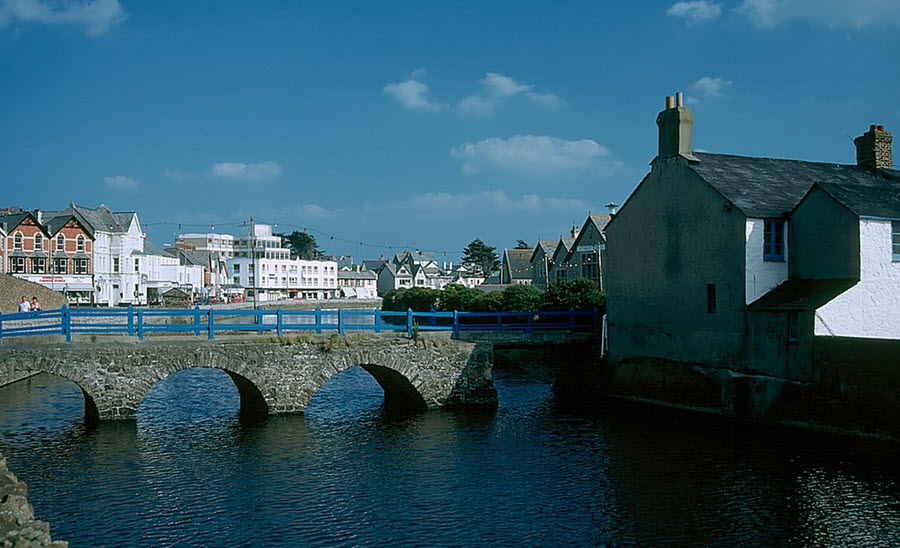 The Bude area is home to several good beaches well worth a visit. If you have Bude as your base and wish to visit some nearby rustic beaches without much in the way of facilities, there is Northcott Mouth, Sandy Mouth and Duckpool. Sany Mouth (also known as Sandymouth Beach) is owned by the National Trust, and renowned for its spectacular cliffs and rock formations.

The bridge that connects the two parts of town with each other is named after Nanny Moore, a 19th-century dipper who lived in Bude. A dipper was a strong woman who would get paid to accompany and help women who wanted to swim in the sea. There has been a bridge here for much longer than the 19th century and it remains unclear why the bridge suddenly became known as Nanny Moore´s bridge.

In the olden days, this bridge has a cantilevered section to allow boats to pass.

Bude is, and has been, known under several different names. The full Cornish name is Porthbud, and the settlement has also been called Bede´s Haven. In Cornish, the term “porth” doesn´t necessarily denote a port; it can also mean a bay, haven or harbour.