Cornwall occupies the westernmost part of Great Britain´s South West Peninsula and has the Atlantic Ocean on three sides. The part of the Atlantic Ocean just south of Cornwall is the English Channel, and the part to the north is the Celtic Sea. A large part of the Cornubian batholith is within Cornwall, and the northern coast of the county is renowned for its many cliffs with exposed geological formations.

The coastline of Cornwall is long and varied and dotted with smaller and bigger settlements – many of which have a history stretching back to time memorial. Extensive stretches of the coastline have been declared Areas of Outstanding Natural Beauty.

Cornwall is home to several ports and estuaries that provide safe anchoring for ships, and shipping and fishing are a long-standing tradition in the county. During the Elizabethan era, Cornish pirates plagued the western coast of Britain, and Cornwall was also notorious for the wreckers who preyed on ships along the rocky Cornish coastline. In the 1600s and 1700s, Cornwall was a major smuggling area. 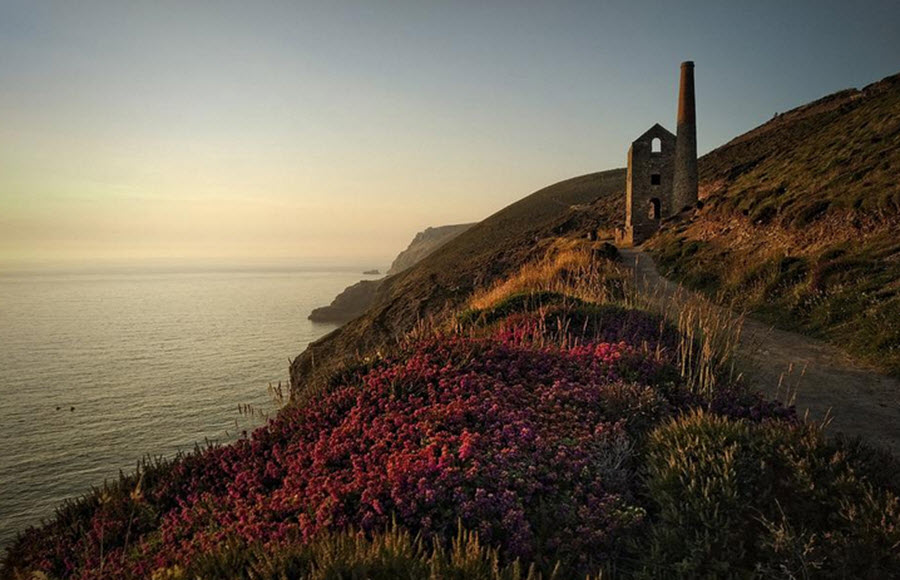 The south-westernmost part of Cornwall is Land´s End.

The southernmost extreme of Cornwall is Lizard Point.

The northern coast of Cornwall

Being on the extreme of the South West Peninsula, Cornwall is exposed to the full force of the prevailing Atlantic winds. This is evident anywhere along the coast, but even more so to the north.

While north is generally more rugged than the south, it is also home to some of Cornwall’s finest sandy beaches – such as Bude, Polzeath, Watergate Bay, Perranporth, Porthtowan, Fistral Beach, Newquay, St. Agnes, and St. Ives.

The southern coast of Cornwall

Affectionately known as the “Cornish Riviera”, the southern coast of Cornwall is more protected than its northern counterpart and home to several broad estuaries.

Unlike the fine sandy beaches of the north, the southern beaches are more likely to be comprised of coarse sand and shingle, interspersed with rocky sections of wave-cut platform.

Due to its extensive coastline, calm estuaries and long tradition of being a holiday getaway location for the rest of England, Cornwall is a hotspot for a number of coastal leisure activities, including surfing, swimming, sailing, and beach combing. A marked footpath connects the coastal beaches and settlements with each other, making the area perfect for on-foot exploration.

Is Truro on the coast?

Truro, Cornwall’s only city, is not located at the coast, but it is connected to the coast as it developed at the confluence of the rivers Kenwyn and Allen, which combine as the River Truro. The River Truro is one of a series of waterways going into the River Fal and the large natural harbour of Carrick Roads on the south coast of Cornwall.

The distance between Truro and the southern coast is roughly 9 miles (14 kilometres).

Cornwall has a temperate Oceanic climate with mild winters and cool summers. Due to the influence of the ocean – and especially the Gulf Stream – Cornwall enjoys one of the mildest and sunniest climates of the whole United Kingdom. This is especially evident along the coast, which has a higher average temperature than the Cornish inland and is even less likely to experiences frost or snow. The Isles of Scilly typically have less than two days of air frost in a whole winter season.

During the summer, the climate is milder in Cornwall than in most other parts of southern England, which have made it a popular destination for holiday makers wishing to escape heat waves. On the Islands of Scilly, temperatures exceeding 30 degrees C are very rare.

In an average year, Cornwall (as a whole, not just the coast) will have over 1,540 hours of sunshine. The sunniest month is July.

Simultaneously, Cornwall receives more rain than eastern Great Britain, as moist, mild air coming in from the south-west turns into precipitation over the peninsula. Also, while Cornwall experiences less in the way of temperature extremes compared to the rest of England, it is definitely not spared from storms and floods. Still, Cornwall gets less rain than the more northerly parts of the west coast.